Can Undocumented Immigrants Get Legal Status in the U.S.?  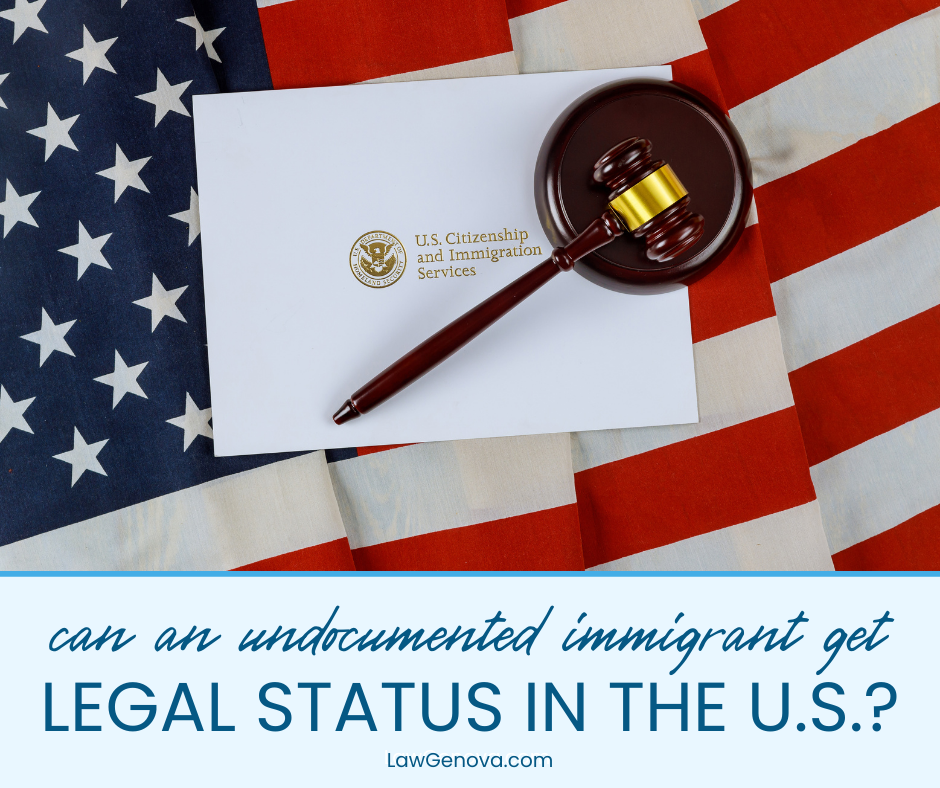 There are currently around 11.4 million undocumented immigrants in the United States, and most of these people don’t have a clear path to lawful permanent residency or citizenship. Unfortunately, if you’re in the U.S. without the proper documentation, it can be incredibly difficult to gain legal status here. However, you may have a few options, which this guide explains.

What Does ‘Undocumented Immigrant’ Mean?

It’s important to note that the term undocumented immigrants applies to any person who doesn’t have the appropriate documentation to remain in the United States – not only to people who entered the country unlawfully. In fact, somewhere around half of all undocumented immigrants entered the U.S. lawfully but overstayed their visas. (When you have a visa to enter the United States, it’s typically only good for a specific period of time period you must leave the country by the time your visa expires.)

U.S. immigration law is very strict when it comes to undocumented immigrants (though not as strict as some countries are). Often, people found to be in violation of U.S. immigration law are removed from the country, and many are prohibited from returning for a certain period of time.

Can an Undocumented Immigrant Get Legal Status in the U.S.?

There are a few ways people who are in the United States unlawfully may get legal status without leaving and coming back with proper authorization. However, these are the exceptions, not the rules. That means if you’re currently in the United States unlawfully, your best chance to get lawful status is to leave, apply to come back, and wait for a decision from USCIS. You may wish to speak to an immigration attorney who can give you the guidance you need. But in the meantime, the following sections outline the few options undocumented immigrants have for gaining legal status in the United States.

U.S. immigration law allows some people to apply for asylum. Essentially, asylum is protection; people who are granted asylum in the United States are allowed to live and work here so they don’t have to return to their home countries.

Asylum is only available in certain circumstances, though. The United States government will only grant you asylum if you’ve been persecuted or are in danger of persecution in your home country based on one of the following five factors:

The U.S. government’s definition of persecution is fairly narrow and includes things like physical violence or torture, violations of human rights (such as genocide, slavery, or forced abortion or sterilization), threats of harm and unlawful detention. It also includes the infliction of mental, emotional or psychological harm, as well as economic discrimination or harm and a few other types of discrimination and harassment.

The persecutor is important, too. If you’re seeking asylum in the U.S., you must show that the persecution came from your country’s government or groups that the government is unable to control (such as guerillas, tribes or organized vigilante groups). In some cases, you may also be able to seek asylum in the U.S. if you’ve been the victim of domestic violence in a country that won’t (or can’t) protect you.

Related: All about immigration interviews

Temporary protected status, or TPS, is available to people whose home country has recently been through an environmental or natural disaster, a civil war or other circumstances that makes returning dangerous. This humanitarian program is only available to people from certain countries (those that have had a recent disaster, war or special circumstances), and the list of countries is subject to change.

To be eligible for TPS, you must be a national of one of those countries (or a person with no nationality who last resided in one of those countries). You must also file during a specific time period, and have been continuously residing in the United States since the date specified for your country.

TPS may not be available to you if you:

If USCIS grants you temporary protected status, you may be able to re-register to maintain your benefits. That applies to all beneficiaries, whether USCIS, an immigration judge, or the Board of Immigration Appeals (BIA) granted your TPS status.

Related: When do you take the U.S. citizenship test?

Deferred Action for Childhood Arrivals (DACA) is a U.S. government policy that may allow you to request deferred action on removal. Plainly speaking, DACA may enable you to stay in the United States, even if you entered the country unlawfully – but only if you:

You may request DACA even if you’re in removal proceedings, have a final removal order, or have a voluntary departure order, as long as you’re not in immigration detention at the time you file your request. If you’re requesting DACA for the first time, you may want to speak to an attorney about your situation; your immigration lawyer can answer your questions and help ensure that DACA is the right path forward for you (and if there’s a better solution, she’ll let you know).

Related: Getting a green card with a criminal record

If you served in the U.S. armed forces, including the Army, Navy, Marine Corps, Air Force, Coast Guard or Space Force, you may be eligible to stay in the United States even if an immigration judge finds that you’re unlawfully present here. However, you’re only eligible to stay based on your prior service if you were honorably discharged and you served between the following dates in one of the following conflicts:

You may be eligible even if you didn’t deploy. You should speak to an immigration attorney about your situation; your lawyer can help you file the appropriate petitions to remain in the United States.

Can You Get Married to a U.S. Citizen to Avoid Deportation if You’re Undocumented?

Marrying a U.S. citizen or lawful permanent resident (green card-holder) won’t solve your problems if an immigration judge orders you to leave the United States. In fact, doing so will likely result in your removal from the country – and you may even be barred from coming back for a certain period of time.

Related: How to get a green card through marriage

What Happens if the Government Finds Out That You’re Undocumented?

Related: Your guide to deportation proceedings

How Can You Get Legal Status as an Immigrant in the U.S.?

It is possible for an undocumented immigrant to get legal status in the United States, but most often, it’s easier to apply for legal status from outside the U.S., when you’re not in violation of U.S. immigration law. In either case – whether you’re currently in the U.S. without documentation or you’re outside the U.S. and wish to immigrate here – you should speak to an attorney before you attempt to file any petitions with USCIS or another government agency. However, bear in mind that it’s often difficult to get legal status if you’ve entered the country unlawfully or overstayed a visa.

Do You Need to Talk to an Immigration Attorney About Getting Legal Status?

PrevPreviousWhat Happens at an Immigration Interview?
NextWhat Are Immigration Fraud and Willful Misrepresentation? Next