Can You Get a Green Card With a Criminal Record? 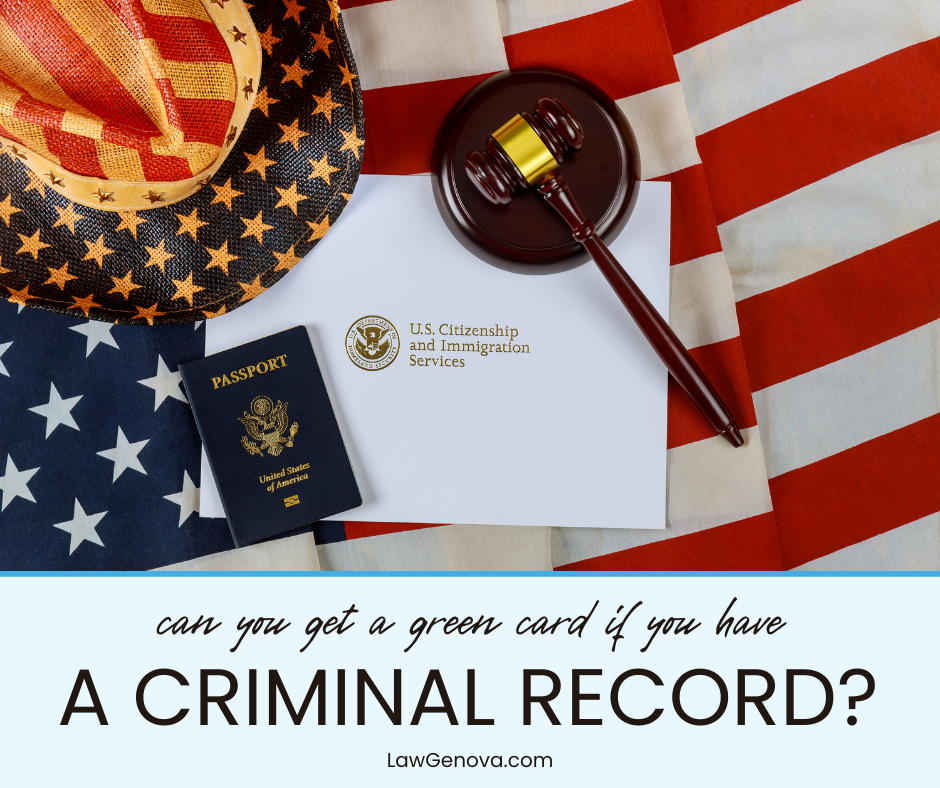 If you’re like many people, you want to immigrate to the United States and become a lawful permanent resident. You may even wish to eventually become a U.S. citizen. But what if you have a criminal record? This guide explains whether you can get a green card – and what challenges you may face.

Before you read any further, you need to know that if you have a criminal record, you must disclose it to U.S. Citizenship and Immigration Services (USCIS). If you lie on an immigration form, USCIS will reject your application.

Can You Get a U.S. Green Card if You Have a Criminal Record?

Only convictions for these crimes make you ineligible. You were only convicted if you went to court and a judge said you were guilty of a crime, or you received a sentence (punishment) such as jail time, probation or community service.

If police arrested you and released you without charges, if the state charged you with a crime and dropped the charges, or if you went to court and the state found you not guilty of the crime, don’t worry. These circumstances alone don’t affect your eligibility for a green card.

Related: The complete guide to green cards through marriage

Aggravated felonies make a person ineligible for a green card. An aggravated felony is a crime that the U.S. government defines in the Immigration and Nationality Act (INA), but the term can be a little confusing. That’s because every state in the U.S. has its own definitions of crimes, and some crimes that are on the INA’s aggravated felony list aren’t actually felonies in some states. (And that doesn’t even address the word “aggravated,” which has a different definition in many states.)

The following table outlines a few of the crimes the INA considers aggravated felonies. It’s not a complete list, though, and even if a crime isn’t defined as an aggravated felony, USCIS and the U.S. government may consider it to be one. That’s why it’s so important to work with a Port Chester immigration attorney if you want a green card but have a criminal record. Your attorney can evaluate your case and take the appropriate steps to help you apply.

Again, this isn’t a complete list. Also, even if the INA doesn’t explicitly mention a crime, the U.S. government may still consider it an aggravated felony.

Convictions for these crimes may make you ineligible for a green card. But that’s not necessarily the end of the road: Your attorney may be able to ask for a waiver. The government decides who gets these waivers on a case-by-case basis. The nature of the crime and the applicant’s rehabilitation play major roles in whether a person gets a waiver. The government is very unlikely to grant a waiver for a conviction like murder or rape. It’s more likely to give you a waiver if you were convicted of getting into a fistfight with a friend and completed a sentence of probation for it (or something equally “minor”).

If you have a criminal record and want a green card, it’s important that you speak to an attorney. Your attorney can ask the government for a waiver for you.

Related: Everything you need to know about deportation from the U.S.

What is Moral Turpitude?

The term moral turpitude refers to any “immoral, unethical or unjust departure from ordinary social standards such that it would shock a community.” In plain English, that means any crime committed with the intent to defraud or physically harm someone may be considered a crime of moral turpitude. The most common examples of these crimes involve murder, rape, fraud and animal abuse (or animal fighting).

Basically, if a crime is shocking to everyday people – such as running a dog fighting ring – it may count as a crime of moral turpitude. Other offenses, such as driving under the influence (DUI) or trespassing, don’t involve moral turpitude.

If you’ve been convicted of a crime involving moral turpitude, you can’t get a green card. But as with other criminal convictions, you may be eligible for a waiver. Your immigration lawyer will take a close look at your case and help you figure out what to do if your state has convicted you of one of these crimes.

What Crimes Involving Illegal Drugs Make You Ineligible for a Green Card?

Any drug conviction may make you ineligible for a green card. That’s true whether the state convicted you of possessing a little over an ounce of marijuana or trafficking 1,000 pounds of cocaine. There is one exception in the INA, though: If you have only one drug conviction, and that conviction was for possession of 30 grams or less of marijuana for personal use, you may still be eligible for a green card. However, if that’s your situation, you still need to apply for a waiver.

The U.S. government takes these types of crimes very seriously, so any drug conviction may make you ineligible to get a green card.

How Convictions Outside the United States Affect Green Card Eligibility

Sometimes convictions outside the United States affect green card eligibility. These convictions may be in your home country or in another country.

If the conviction is equivalent to the U.S.’s version of an aggravated felony, crime of moral turpitude or drug crime, USCIS treats it the same way it would if you were convicted in the United States. However, if the crime isn’t equivalent, your attorney may be able to argue that it shouldn’t count against you for immigration purposes. In either case, you may still be eligible for a waiver – and the government decides waivers on a case-by-case basis.

How to Answer Criminal History Questions on Your Green Card Application

The questions on the form ask if you have ever experienced certain circumstances. That means from the day you were born through the time you fill out the application. Here are a few of the questions on green card applications:

These questions ask you about any events that have occurred during your lifetime, so even if you were arrested as a child in your home country but released, you have had your criminal record cleared, or you have committed anything that you know was a crime (even if you weren’t caught), you must be honest.

You and your immigration attorney will sit down and talk about your criminal history. Be sure to share everything with her; she needs to include complete information on all your immigration forms.

What Happens if You Leave Out Some or All of Your Criminal History?

Leaving out some or all of your criminal history counts as immigration fraud. Naturally, if you made a simple mistake – such as forgetting that you pocketed a piece of candy from a convenience store when you were a child – your attorney can explain. However, if you lie because you think that USCIS won’t find out about your criminal record, you paid to have your record cleared, you were convicted in another country, or you don’t think a crime “counts,” you’re committing immigration fraud.

If you don’t disclose everything on your immigration forms, or if you purposely lie, the U.S. government may tell you that you’re permanently inadmissible. That means you can never get a green card (or even a visitor visa) to the United States.

Do You Need to Talk to an Immigration Attorney About Getting a Green Card With a Criminal Record?

If you need to talk to an immigration attorney about getting a green card when you have a criminal record, we may be able to help you. Call our office at 914-481-8822 to schedule a consultation with an experienced, knowledgeable immigration attorney who can answer your questions and give you the legal advice you need.

PrevPreviousGreen Card Through Marriage: Everything You Need to Know
NextWhat Happens at an Immigration Interview?Next