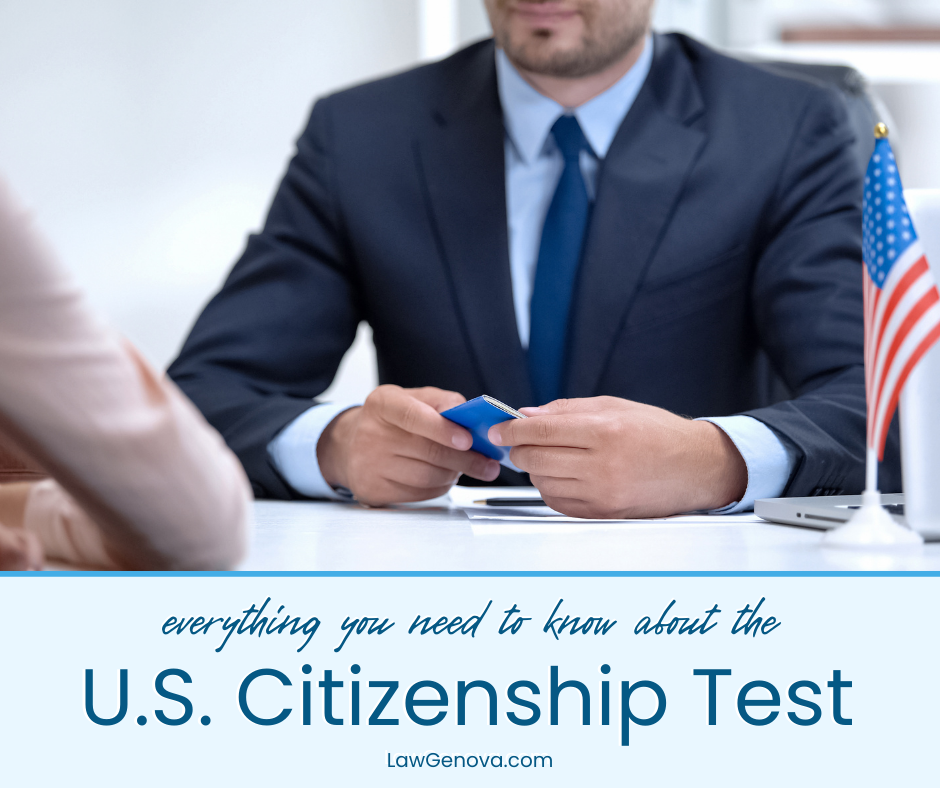 Nearly everyone who wants to become a naturalized U.S. citizen must take the citizenship test. There are a few exceptions, but for the most part, you can expect to take the test during your naturalization interview.

What is the U.S. Citizenship Test?

Sometimes called the naturalization test, the U.S. citizenship test is a test that just about everyone who wants to become a United States citizen must take. The test covers your knowledge of civics and the English language, and it involves speaking, reading and writing.

Though many people expect to sit at a desk, pull out a pencil and begin testing, that’s not exactly how this test works. Instead, it’s a built-in part of your naturalization interview.

The English part of the U.S. citizenship test involves:

Note: If you read and write the first sentence correctly, you won’t have to read or write the other two.

The civics portion of the citizenship test covers a variety of questions on U.S. history and how the government works. You may also be asked questions about rights, responsibilities and other aspects of United States citizenship.

Questions and Answers on the Citizenship Test

You don’t have to guess at what questions you’ll face during your immigration interview and citizenship test period in fact, USCIS has a complete list of the questions that an immigration officer may ask you on its website. (It provides the answers, too, which makes studying a lot easier!) You can access the list here, but here’s a sampling of some of the questions USCIS may ask you:

The complete list of possible questions is available on USCIS’s website. You may print them and use them as a study guide. USCIS officials won’t ask you test questions that aren’t on that list. (But remember, you take the test as part of your naturalization interview. That means the USCIS officer conducting your interview will most likely ask you questions about your application. They may also ask you questions on other topics that aren’t part of the citizenship test.)

How Many Questions Does USCIS Ask You?

The USCIS official conducting your citizenship will ask you up to ten questions. You must get six of them right. Typically, as soon as you get six correct answers, the questions stop – there’s no need to keep asking, because you only need six to pass.

It’s okay if the USCIS officer needs to ask you all ten questions. Don’t stress yourself out over it if that happens to you – you’re allowed to get four of the questions wrong.

What Happens if You Fail the U.S. Citizenship Test?

If you fail either part of the citizenship test – the English or civics portion – it’s not the end of the world. You can retake the failed portions. However, you can only fail the test twice. If you fail twice, USCIS will deny your naturalization application. That means you need to reapply for naturalization, starting at square one.

Exemptions and Exceptions for the U.S. Citizenship Test

Though most people are required to take the citizenship test, some people are exempt. That means they don’t have to take the test (or a part of the test) at all. Other people have exceptions, such as being allowed to use an interpreter.

You don’t have to take the English part of the citizenship test if:

Note: If you’re age 65 or older at the time you file your application, and if you’ve been a green card-holder for at least 20 years, you get special consideration on the civics part of the test. You’re also allowed to bring a qualified interpreter with you to your interview. This is sometimes called the 65/20 exemption.

If you can’t take the English or civics portion of the U.S. citizenship test because you have a medical disability, USCIS can give you an exception. Your doctor needs to fill out a specific form that explains why you can’t take the test. After your doctor completes the form, your attorney will file it with your naturalization application.

Note: Only a licensed medical or osteopathic doctor, or a licensed clinical psychologist, can fill out the disability exception form.

The U.S. government requires USCIS to provide accommodations or modifications to people with disabilities. If you have a disability that makes it difficult for you to take one or both portions of the citizenship test (or to otherwise participate in the naturalization process), USCIS can make adjustments for you. You should discuss these issues with your attorney so that she can list them in the appropriate place on your naturalization application.

Other Issues at Your Naturalization Interview

The U.S. citizenship test is only part of your naturalization interview. The USCIS official conducting your interview will most likely talk to you about your application and ask you other questions that aren’t related to the test. Some of the questions may involve how attached you are to the principles and ideals in the U.S. Constitution, where you live and the answers you provided on your naturalization application.

The naturalization interview is nearly your last stop on the path to citizenship. After you complete your interview and pass your citizenship test, USCIS will schedule your Oath of Allegiance. You must fill out Form N-445 before you show up to take the oath. This form contains questions about whether your circumstances have changed (such as whether you’ve been married or divorced, traveled outside the U.S., or been arrested).

Most people take the Oath of Allegiance during a ceremony at the same USCIS field office where they interviewed. Before that ceremony takes place, USCIS will collect your green card; then, an official will review your answers on Form N-445. Then, you’ll take the Oath of Allegiance to the United States and receive your naturalization certificate. At that point, you’re officially a U.S. citizen, and you don’t have to take any more tests or file any more applications. You can simply start enjoying the new rights and responsibilities that come with U.S. citizenship.

Do You Need to Talk to an Immigration Attorney About Citizenship?

If you need to talk to an immigration attorney about getting naturalized citizenship in the United States, we may be able to help you. Call our office at 914-481-8822 to schedule a consultation with an experienced, knowledgeable immigration attorney who can answer your questions and give you the legal advice you need.