How to Bring Your Foreign Fiancé to the United States 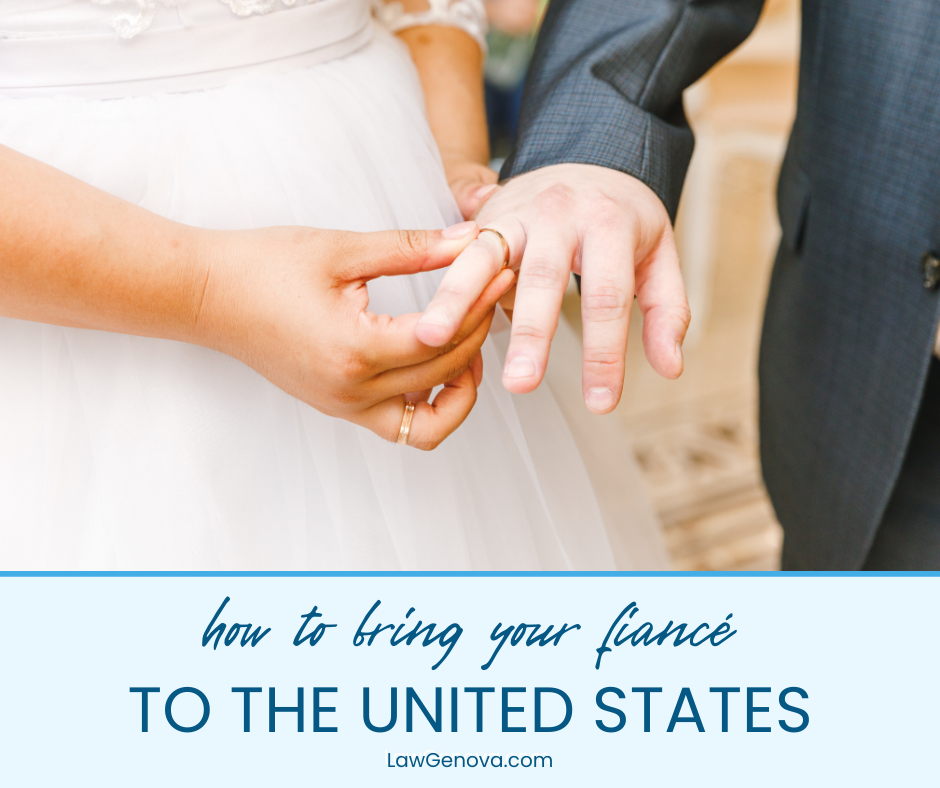 When you want to marry a non-U.S. citizen or lawful permanent resident, you may be able to sponsor them to come to the United States. Working with an immigration attorney may be the simplest way to bring your foreign fiancé to the U.S., which this guide explains.

How to Bring Your Fiancé to the United States

It’s possible to bring your foreign fiancé to the United States for the purpose of getting married. However, you must follow specific procedures and provide the U.S. government with the appropriate documentation; otherwise, U.S. Citizenship and Immigration Services (USCIS) won’t approve the petition. The most important form you need is Form I-129F, Petition for Alien Fiancé(e). You need other supporting documentation, as well, which your attorney can explain to you.

Why Would You Need to Bring Your Fiancé to the States?

Many U.S. citizens want to bring a foreign fiancé to the United States so they can get married. Often, this is because it doesn’t make sense (or isn’t possible) for the U.S. citizen to leave the country for a wedding. Fortunately, the K-1 visa is available to foreign fiancés who are sponsored by a U.S. citizen. But unfortunately, these visas aren’t available to fiancés of lawful permanent residents. (See the later section, “What if You’re a Lawful Permanent Resident With a Foreign Fiancé?” for more information that can help you in this situation.)

A K-1 visa (commonly called a fiancé visa) is available to engaged partners of U.S. citizens. This visa allows a foreign fiancé to enter the U.S. for their own wedding. Like any other visa, there’s an expiration date on the K-1 visa – and if you don’t get married before the visa expires, the foreign fiancé must leave the country and reapply.

Who Needs a K-1 Visa for a Foreign Fiancé?

You only need a K-1 visa if your fiancé isn’t a U.S. citizen and you wish to be married here, in the United States. If you marry your fiancé Outside the country, you don’t need this type of visa. You can skip straight ahead to the process of getting your spouse a green card.

Related: The complete guide to deportation

You’re only eligible to bring your fiancé to the United States on a K-1 visa if:

A Word on the In-Person Meeting Waiver

You may be eligible to apply for a waiver if meeting your spouse in person prior to your marriage would violate strict and established customs of their culture or social practices. You should speak to your New York immigration attorney about applying for this waiver so your fiancé can get a K-1 visa if you haven’t seen each other in person within two years of your application.

What if You’re a Lawful Permanent Resident With a Foreign Fiancé?

Unfortunately, K-1 visas aren’t available to foreign fiancés of lawful permanent residents of the United States; they’re only available to fiancés of U.S. citizens. However, that doesn’t mean you can’t marry your fiancé – it just means that:

A word of caution, though: It’s one thing if you marry someone who’s already in the U.S. on a student visa, and another matter entirely if your fiancé applies for a visa (other than a K-1 fiancé visa) to come to the U.S. and marry you. When someone enters the U.S. by saying their visit is for one purpose but it’s really for another purpose, that’s considered immigration fraud – and it could get them into serious trouble. In fact, the U.S. government may deport them and bar them from returning. They may even face jail time and fines of up to $10,000. If you’re a lawful permanent resident who wants to marry a non-U.S. citizen, it may be in your best interest to talk to an attorney about your options before you make any big moves.

Note: If your fiancé is already in the U.S. and entered the country using a valid visa, it may be permissible for you to marry them and file an I-130 relative petition to help them get lawful permanent residency. Again, though, you should speak to an immigration attorney to make sure you (or your fiancé) won’t end up in hot water with USCIS.

Related: What happens at an immigration interview?

How Much Does it Cost to Get a Fiancé Visa?

The cost associated with a fiancé visa is always subject to change. You can check the most current filing fee here.

How Long Does it Take to Get a K-1 Visa?

On average, it takes between six months and a year to get a K-1 visa. However, you can check the most current processing times here.

Can Your Fiancé Bring Children to the U.S.?

Your fiancé may be able to bring their unmarried children when they come to the U.S. on a K-1 visa. (However, the children must be younger than 21.) Their children need K-2 nonimmigrant visas. In order for USCIS to give your fiancé the green light to bring them, you must include their names on your Form I-129F. If approved, they may travel with your fiancé or come after your fiancé arrives. Children can’t travel to the U.S. before your fiancé does.

Many people choose to work with an immigration attorney to apply for a K-1 fiancé visa. That’s because the paperwork can be confusing – and so can knowing which supporting documentation you need. The process generally goes like this:

Why Would a K-1 Visa Petition Be Denied?

The consular officer assigned to your petition must decide whether your relationship is bona fide. In plain English, that means they’re looking for evidence that you’re in a genuine relationship. They’re also looking for evidence that your fiancé isn’t marrying you only to gain an immigration benefit. If the consular officer thinks that your relationship isn’t genuine, they’ll deny your fiancé visa application.

Do You Need to Talk to an Immigration Attorney About Bringing Your Fiancé or Spouse to the U.S.?

PrevPreviousWhat Does it Mean to Sponsor Someone for a Green Card?
NextHow to Help Your Parents Get Green CardsNext